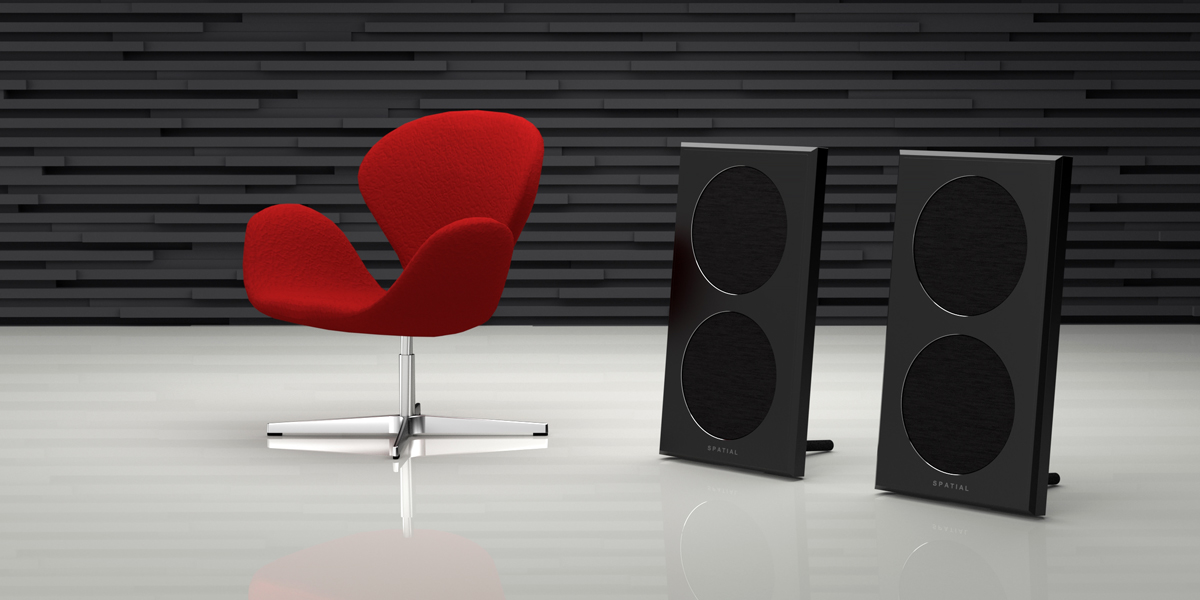 Available in the following finishes:

A 60 day trial period allows you to experience the Hologram in your own home without risk.  Terms

Spatial’s new Hologram series of loudspeakers incorporate a number of advanced design features that work together to achieve a more realistic reproduction of music than ever before.

• Open Baffle Design – Eliminating the speaker box dramatically improves the sound of a speaker by eliminating all manner of box related resonances and re-radiation of sound from inside the box. A free-flowing ease and dimensionality is immediately recognizable as more like actual music and less hifi sounding. Bass is extremely detailed and realistic sounding, while the midrange is portrayed naturally, with an open, 3D presentation. The challenge of creating an open-baffle speaker with powerful bass is especially daunting, The Hologram series succeed in producing unprecedented bass performance in a compact form factor.

• Point Source Design – A properly designed point source driver provides a coherent transition from midrange to treble and stable imaging by eliminating comb-filtering; the interference patterns found when the  tweeter is physically separate as in most speaker designs. All three Hologram models exhibit phenomenal imaging and soundstaging.

• Controlled Directivity Design – Dispersion angle is limited to around 80 degrees and held constant across the spectrum, allowing less interaction with the room and much more even response in reflected field energy.

• Linear Response – Uniform frequency response is critical to accurate music reproduction. Great care has been taken in voicing the speaker in the effort to reproduce natural pitch and tonal balance.

The idea with controlled directivity is to create a situation in the room where the frequency response shape (and therefore tonal balance) of the direct field is similar to the reflected field. In domestic listening environments, the walls and floor/ceiling boundaries are close to the speaker, so the manner in which the speaker interacts with the boundaries plays a determining role in the final sound quality in a given listening room. Concurrently, the reduced levels of reflected energy lowers the amplitude of room sound, increasing the ratio of direct to reflected field energy at the listening position.

Conventional box speakers with surface mounted mid and treble drivers typically have very uneven frequency response off-axis. Unfortunately, this uneven response pattern is being reflected off the boundaries, which is then mixed with the on-axis, direct radiation coming from the speaker. The summed response at the listener position is one of degraded quality compared to the direct field alone. Additionally, the reflected field energy is arriving later due to the extra distance traveled, causing a number of time domain related problems such as blurred imaging and poorly constructed soundstage projection. The sound also takes on the character of the room more than is desired, creating inconsistancy from one installation to the next. Loudspeaker manufacturers using the conventional approach really have no idea what their customers are hearing due to room interaction being such a large factor.

The best known way to address this problem is to employ controlled directivity principles, which are well known and highly developed in professional audio, such as in studio monitors and live sound applications. As applied to the home listening environment, this means that the dispersion angle is narrower and more consistent with frequency, with less energy hitting the side walls and floor/ceiling boundaries. We aim to produce an 80 degree pattern that drops off quickly beyond that point and has a frequency response shape close to the on-axis response. We can’t eliminate energy bouncing off boundaries, but we can reduce the level, which increases the ratio of direct to reflected field energy. Then, the summed response at the listener position is similar to the quality one would expect in a near-field listening arrangement. This, in effect allows the listener to hear the speaker itself, instead of such a strong mix of the speaker and room.

We achieve broadband uniformity of directivity by controlling the radiation angle specific to the differing properties of bass, mid and treble. Open-baffle bass provides directionality in the bass region where the wavelengths are very long, the large mid cone controls the angle in the midrange by virtue of its size compared the wavelengths of the mids, while the same cone provides a waveguide function to the point source compression tweeter. The Hologram achieves these objectives in a surprisingly simple and compact package.